Why is Emotional Intelligence an important Leadership trait? 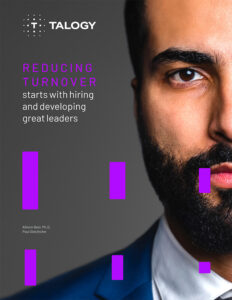 Previously published by PSI Talent Management or Cubiks, prior to becoming Talogy.

Emotional Intelligence has become a hot topic in terms of leadership traits. What exactly is it and how does it play out in the context of leadership? Emotional Intelligence has to do with one’s ability to both recognize and control his/her own emotions, while leveraging emotions appropriately as situations dictate. It also has to do with one’s awareness of and sensitivity towards others’ emotions. It could easily be argued that emotional intelligence is an important characteristic for anyone at any level of an organization. A leader’s emotional intelligence can have far-reaching influence over their relationships, how they manage their teams, and generally how they interact with individuals in the workplace.

Most leaders frequently face stressful situations. Leaders who are low in emotional intelligence tend to act out in stressful situations because they’re not able to manage their own emotions. They may be prone to behaviors such as yelling, blaming, and being passive aggressive. This can create an even more stressful environment, where workers are always walking on eggshells trying to prevent the next outburst.

Not being emotionally intelligent can inhibit collaboration. When a leader doesn’t have a handle on his own emotions and reacts inappropriately, most of his employees tend to feel nervous about contributing their ideas, for fear of how the leader will respond.

A leader who lacks emotional intelligence doesn’t necessarily lash out at his/her employees. Not being emotionally intelligent can also mean an inability to address situations that could be fraught with emotion. Most leaders deal with conflict, and a leader who isn’t clued into others’ emotions may have a difficult time recognizing conflict and dealing effectively with its resolution.

What happens when leaders are emotionally intelligent?

Leaders who are emotionally intelligent foster safe environments, where employees feel comfortable to take calculated risks and to voice their opinions. Working collaboratively isn’t just a goal, but it gets woven into the organizational culture.

When a leader is emotionally intelligent, s/he can leverage emotions for the good of the organization. Leaders often have to act as change agents, and if they are aware of how others will react emotionally to changes they can anticipate this and plan the most appropriate ways to introduce and carry out the change.

Emotionally intelligent leaders don’t take things personally and are able to forge ahead with plans without worrying about the impact on their egos.

Although some people tend to have more emotional intelligence than others, it is definitely a trait that can be measured and developed.